Register HERE to join myself and the team for LIVE coverage of the latest US Payrolls report this Friday 7th August 2020 from 1330BST.

Global confirmed cases of coronavirus have now topped 18.6mln, registering 685,179 deaths worldwide, according to the Johns Hopkins University. Despite these sobering statistics, US cases rose by 58,908 on Saturday, the least in five days, marking a 1.3% day-on-day increase that’s less than the 1.6% average for the previous seven days. In the UK, the Prime Minister Boris Johnson has "applied the handbrake" on the removal of the final remnants of the COVID-19 lockdown as new cases are rising again in the North West of England and with half an eye on the latest developments unfolding on the continent (Spain/France). Sunday newspapers were rife with speculation on scenario planning at Number 10 with the Telegraph reporting that London could be locked down if infection rates spike with the Sunday TImes adding that there would be travel curbs in and out of the M25 highway encircling Greater London and a ban on overnight stays.

For markets, the situation remains one in flux and the nature of the reproductive rate of the virus means that the situation and subsequent actions by authorities could happen quickly. Localised responses and regional data will be key as to distinguishing between isolated clusters vs community spreading, such as what was seen in Leicester and Blackburn. For now, we will remain on high alert for updates throughout the week with focus in the UK, Spain and France.

Employers likely added just over 1.5 million workers to payrolls last month, or about a third of the prior month’s pace, according to a Bloomberg survey ahead of Friday’s Labor Department report, which covers the period through mid-July. The jobless rate is projected to drop by 0.6 percentage points to 10.5%, compared with a 2.2-point decline in June, and still triple the pre-pandemic level of 3.5%. 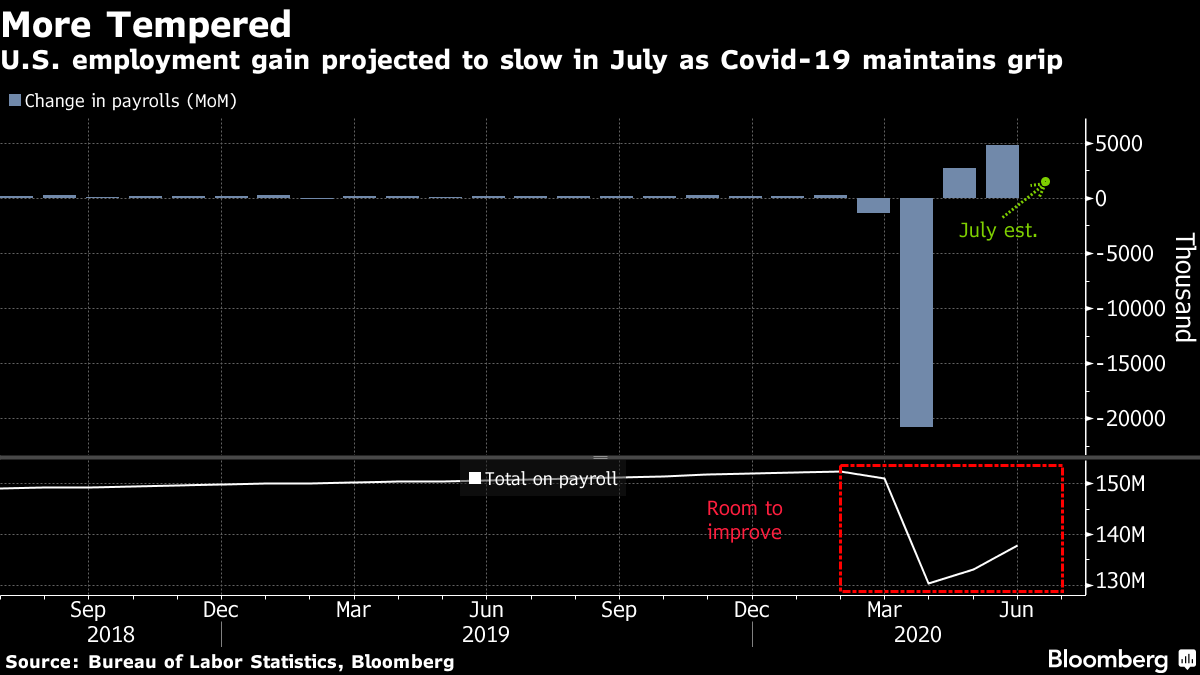 Once again timing is key, and given the usual reference period the report will not capture the bulk of the layoffs in the second half of July as reopening plans were reversed in several states. As such, we can expect the usual intraday bout of volatility but markets may well be more interested in COVID developments and deal-making on Capitol Hill now that the enhanced jobless benefits have finished and much work remains on approval for further stimulus.

Over the coming weeks analysts at ING note that with virus fears on the rise, jobs being lost and incomes being squeezed, they feel the recovery could be much bumpier than markets seemingly do.

Bank of England and Reserve Bank of Australia

I expect the Bank of England to stand pat this week with a unanimous vote to leave policy unchanged. Last time out, the Bank expanded the Asset Purchase Facility (APF) by GBP 100bln and despite growing murmuring on Threadneedle Street of negative rates, this month's meeting is about taking stock on actions already delivered and observing incoming data while monitoring COVID-19 developments. 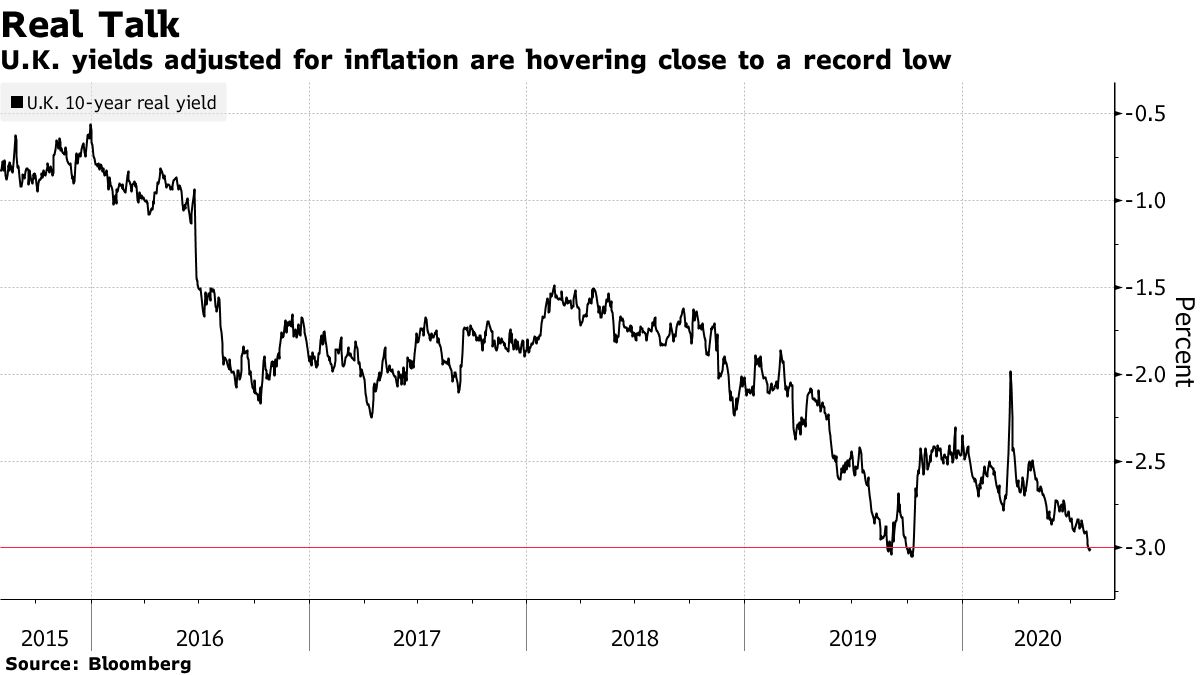 Analysts at Citi wrote this weekend that the Bank could pave the way for negative territory by removing the guidance that the lower bound is “close to, but a little above, zero” at its decision, but HSBC are less convinced that we will see the same rate strategy as adopted by the ECB and BoJ, suggesting that the MPC could rely on the rhetoric of negative interest rates, without having to actually do so, the so called “Maradona” effect.

Australia’s central bank meets on Tuesday and is set to keep its overnight cash rate and three-year yield target unchanged despite the first bout of deflation in 22 years. The Aussie docket is full this week (Trade data, retail sales, RBA Monetary Policy Statement) and attention domestically remains on the latest COVID outbreak, with Australia’s Victoria state tightening restrictions this weekend and declaring a state of disaster after its outbreak showed no signs of abating three weeks after capital Melbourne was put under lockdown. Metropolitan Melbourne has also been put under curfew limiting movement between 8 p.m. to 5 a.m for the next six weeks.

Will OPEC change its mind?

At the end of last week WTI crude futures dipped towards $38.50, testing the 50DMA and low of July 10th, as market participants became jittery about the global pandemic and renewed quarantine measures being adopted globally. Although prices reclaimed a $40 handle by the close on Friday, OPEC and its allies last month agreed to start tapering their cutbacks from 9.6 million barrels a day in July to 7.7 million from Aug. 1. Crucial to the success of stabilising prices on the supply side is the overall compliance of the producers involved, but after near full implementation of cuts in May and June it has been reported Russia had slightly increased its oil production in July, ahead of OPEC+ plans. This on-going reluctance to adhere to the deal, in combination with an evolving pandemic, means that oil will be worth watching closely this week.

From an index trader's point of view last Thursday's mega-cap tech earnings were the crescendo of the season with the 129 S&P companies reporting this week unlikely to invoke the same excitement. Nonetheless it remains busy for the UK and mainland Europe with large cap names including HSBC, BP and Bayer. 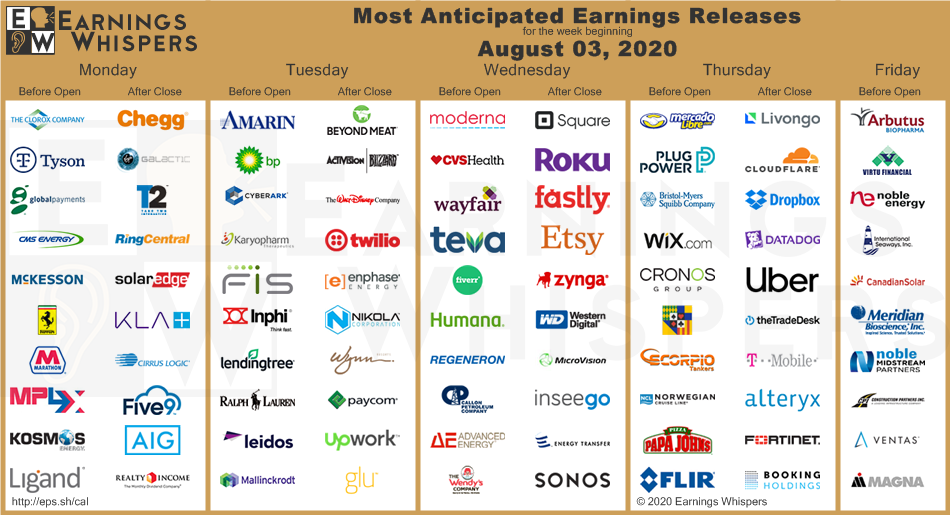 Click the button below to find out more about Amplify Trading's training programmes.